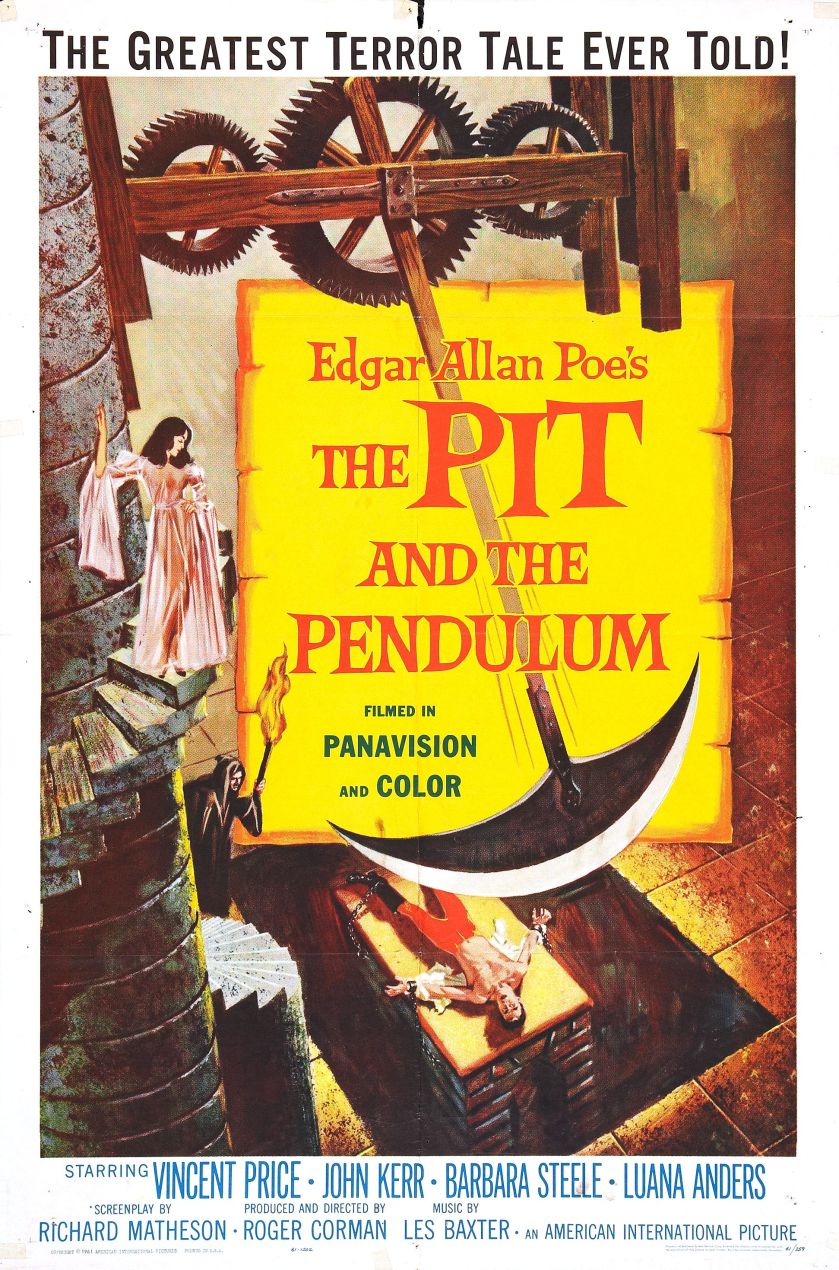 Edgar Allan Poe’s classic short story The Pit and the Pendulum has been terrifying readers and filmgoers for many years. It is the stuff of nightmares. A prisoner finds himself in a cell and discovers that only by chance has he not fallen into a bottomless pit at the centre of the cell. Next he wakes to find himself tied to a wooden frame. Above him a giant pendulum is swinging; it has a massive blade, and it’s slowly coming towards him. He escapes this – just – only to find the walls of the cell closing in on him.

People with clinical depression often talk about the walls closing in on them, being trapped, falling into a dark void, and being utterly isolated.Clinical  anxiety – which often goes hand in hand with depression – is marked by intense fear, of apprehension of an inescapable disaster getting nearer, of being trapped in a situation from which there is no escape. Absolute panic is also a feature of clinical anxiety.

In Poe’s story, the descending blade could also be the hands of a clock, razor sharp hands moving to slice a victim.

These are extreme cases of anxiety and depression. They involve fear of approaching death, being trapped, being totally powerless and alone. Time is torture, torture is time.

Away from Poe’s nightmare scenario, serious medical problems include obsessive compulsive disorder, the need to repeat certain behaviours and actions which is beyond conscious or rational control. Thanatophobia is an abnormal anxiety of death which severely interferes with living. Both of these examples show further how time is a factor in mental distress.

There is no such thing as normal life as many people point out if you ever use the phrase. Neither are there any neat lines between mental health disorders and ‘healthy’ popuations. Most of us thankfully will not experience the devestating experiences of severe mental disorders – including addiction – but a statistic that does the rounds is that one in four of us will experience some degree of mental/emotional distress significant enough to warrant medical or other professional intervention (which not everybody gets or wants, by the way). What is certain is that we all experience moments or longer periods of positive and negative complexions. Bereavement is a wretched time, and for some it takes a pathological turn and becomes depression. We all experience sadness and sometimes despair. That is part of being human and most of us are mature enough to be content with the human condition, to take the rough with the smooth.

For all of us, though, no matter how content we are – and there are millions in the UK alone who have very clear reasons not to be content overall with their lives – time is always in the background. Unique among creatures, we are aware of ageing and our death. We know intellectually that life is short:

We ‘know’ we are going to die but, according to a book by Ernest Becker in 1973, The Denial of Death, deep down we deny it. Yet everything we do, and our societies and cultures do, according to Becker is based on this denial. Not sick people or weird people, but everyone. Everything that gives our lives meaning is a sort of defence against acknowledging death. More gloomy stuff so time for a quick mood lightener:

Whatever we come to think, if we consciously think about it at all, about time and death will influence how we live our lives.

For most of us, life is work and leisure. Work can be awful – it can make us ill or it can just be very boring – but sometimes leisure hours can be worse. For those who can’t work or aren’t working, time can begin to make itself felt very negatively. For those who live a reasonably balanced life between work and leisure, or within permanent leisure, we have choices as to how to use that time. Choices, of course, are always limited by many factors. And all our choices are largely based on the previous choices we’ve made. Some people arrive at the middle or end of their lives and regret the choices they made, regret what they ‘made’ of their lives.

Whatever choices we to spend our life time (after all, time is money, right?) there will be many restraints, some of which we aren’t aware of. Economic, educational, cultural circumstances play a large part in shaping us and pointing us towards different kinds of life. At the time of writing nobody in the UK is under threat of military bombardment, famine or environmental disaster, but our choices are still restricted. Time itself is changing. Some of us have to endure pecarious zero hours contracts or work in soul-destroying jobs. Others may be worn out or stressed out by their work. The promised freedom from work offered by new technologies doesn’t seem to have materialised for most people. Accommodation is expensive and workers have to live far away from their place of work to find an affordable place to live meaning increased commuting time.

In his book, 24/7: Late Capitalism and the End of Sleep, Jonathan Crary, Professor at Columbia University, suggests that modern life is becoming more machine-like by the day, humans becoming machines themselves. Only sleep, he argues, is a state free of a pervasive time zone which results from digital work and economics. He points out that the average American slept  ten hours in the early twentieth century and now sleep only six and a half. (He doesn’t point out that people needed more sleep when there was more manual work, but the contrast remains stark). He claims that the number of people who wake once or more during sleep time to check their phones is accelerating quickly. He compares the ‘sleep mode’of a computer – ready to jump into action immediately – to the sleep of the new digital worker. He writes:

….since no moment, place, or situation now exists in which one can not shop, consume, or exploit networked resources, there is a relentless incursion of the non-time of 24/7 into every aspect of social or personal life.

which is to say that our work and leisure is captive to ‘non-time’, that is the loss of the sense of our older senses of time. Whatever choices we make, according to this logic, are made within the overarching digital environment which determines an essential way of living and being which is not a choice.

This kind of book is fairly typical of many scholarly commentaries about the digital world. It’s reminiscent of the Lewis Mumford claim we saw earlier that the nineteenth century’s time universe was made by clocks. It is an example of technological determinism which sees technologies as having a major impact on society and culture -how we live, think and behave. Crary’s book is somehat overstated. For instance, probably the majority of folk in the West live lives based on traditional values and senses of time. Not everyone is ‘ensnared’ in an inescapable digital web. Nevertheless, we can agree that if technologies do not comlpetely determine who we are, there is much sense in seeing that they have a great influence. Many of us would agree at least a vague sense of thow he new digital technologies altering the way we live.

Our mental health is not the ‘opposite’ of mental ‘illness’. There are degrees of health, in mind and body. Many people function fine while feeling ‘below par’ or mildly depressed. Many who haven’t seen a doctor for years nevertheless feel life’s not as bright as it could be. Maybe it’s dull and unsatisfying, never better than ‘fair to middling’. Most of us feel like that at least some of the time.

We may think going from a deprived area to a prosperous suburb a few miles away that the people in the latter were generally happier and living life more to the full. Certainly they wouldn’t be under the awful pressures associated with poverty and its related issues. But many have discovered that a materially well off life doesn’t on its own bring a good quality of life. Being in one class or another doesn’t fully determine how good your life will be, but there’s a greater chance of finding a good life if you don’t have to constantly worry about the bare necessities.

In fact the sort of people Crary (above) has in mind are more likely to be high flyers. But books and films like American Psycho do offer, albeit in greatly exaggerated form, a glimpse into the chaotic lives of some highly ‘succesful’ people._

You can’t infer a person’s life by looking at their bank balance or the suits they wear. You can’t think in stereotypes and apply them to everybody who’s from a ‘deprived’ background:

Both of the films here are reflections of wider society, the extreme results of ‘something in the air’. Most of us have for some of the time or more, felt a dissatisfaction with life, with ourselves or the world or both. Ernest Becker, whom we met earlier opined in typically bombastic tone, “Modern man is drinking and drugging himself out of awareness, or he spends his time shopping, which is the same thing.” Overstated and extreme, but is there not a feeling many of us have had that sometimes we need a break from the dull routines of life? It’s the same old cycles of time, time after time and we want something different?

One way to escape is by dulling awareness, anaesthetising ourselves. Drink and drugs, yes. Hours in front of a screen – television, computer, tablet, smartphone. In our project site Beat the Fix Professor Natasha Dow Schull talks of how after speaking to very many gambling machine addicts, they reported the sense of being in a trance-like state, cut off from time itself and the real world,  uncaring as to whether they were winning or losing just as long as they could keep on playing. (In fact several resented winning because it interrupted playing time).